SATPAC (Systematic Articulation Training Program Accessing Computers) is a computer articulation/phonology program whose purpose is to remediate speech deficits quickly and efficiently. This occurs through the use of facilitating contexts, coarticulation, and natural prosody at a conversational rate with numerous correct repetitions of the target sound.

Get an overview of iSATPAC in less than a minute! 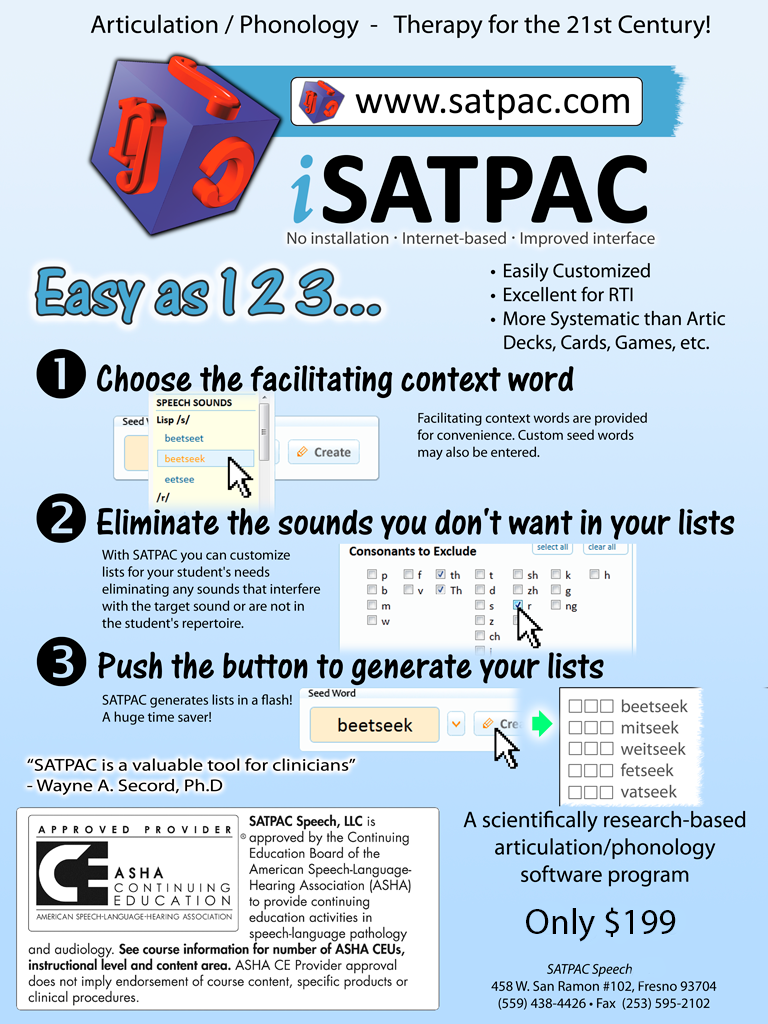 1) Choose a seed word with your target sound from the drop down list. In this case /s/ is the target for a student with a frontal lisp. 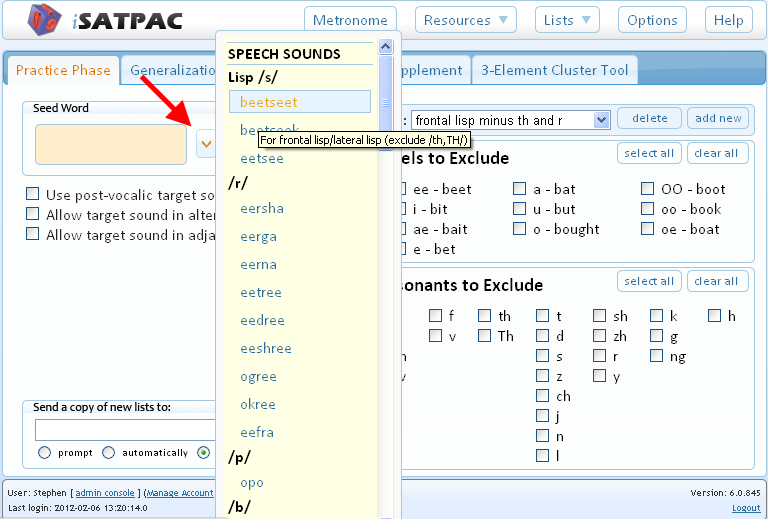 2) Eliminate any sounds from your lists that interfere with the target sound (th,Th) or are not in the student’s repertoire (r). 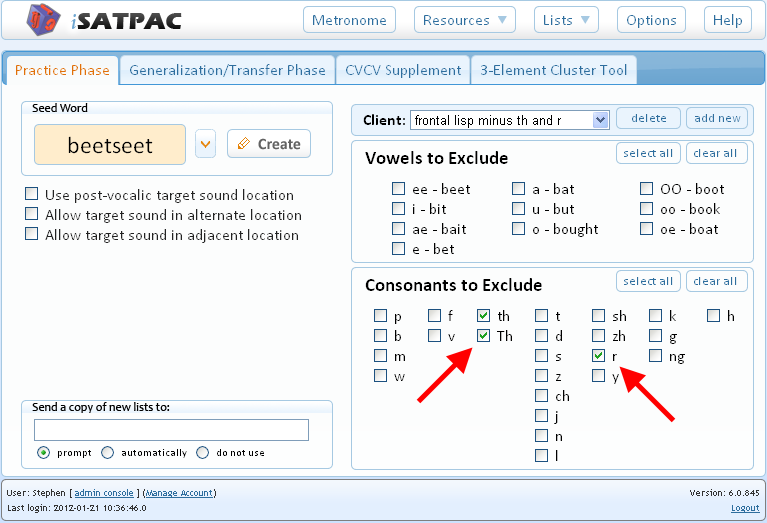 3) Push the Create button to generate your lists 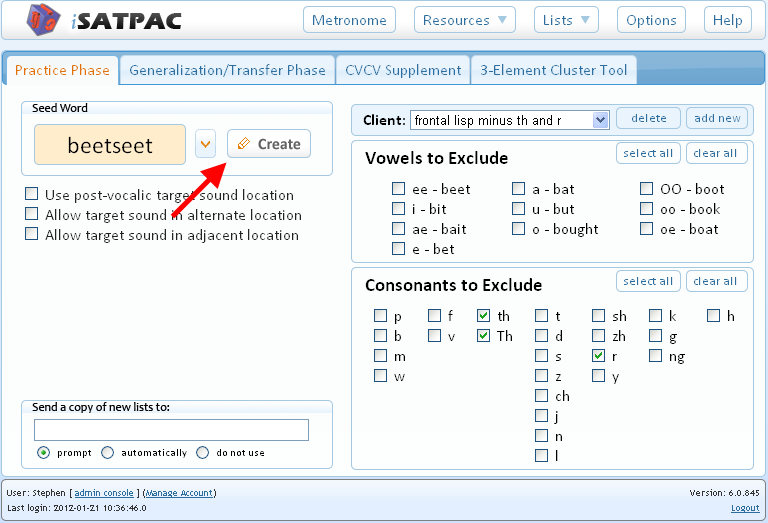 After the target sound /s/ is established using one facilitating context (i.e., beetseet), it is then expanded into many different contexts. For this student with a frontal lisp, the target sound is /s/ in the facilitating context CVCCVC word beetseet. Note that the /th/ sounds which interfere with correct production and the /r/ sound which is not part of the student’s repertoire are eliminated from the following lists. 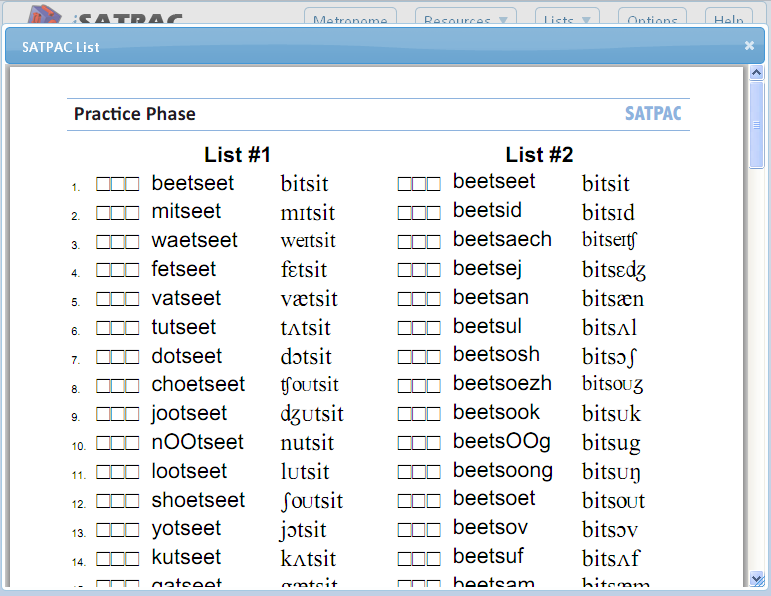 One of the main reasons that SATPAC is so effective is that students develop a consistently correct motor pattern due to the uniform words presented and minimal changes that occur from word to word. Note in list 1 that each word systematically follows the Place-Manner chart and the Vowel Circle in the first two positions of the word followed by the pattern tseet. In list 2, the systematic pattern beets is used followed by changes that occur after the /s/ which is more difficult for the student. 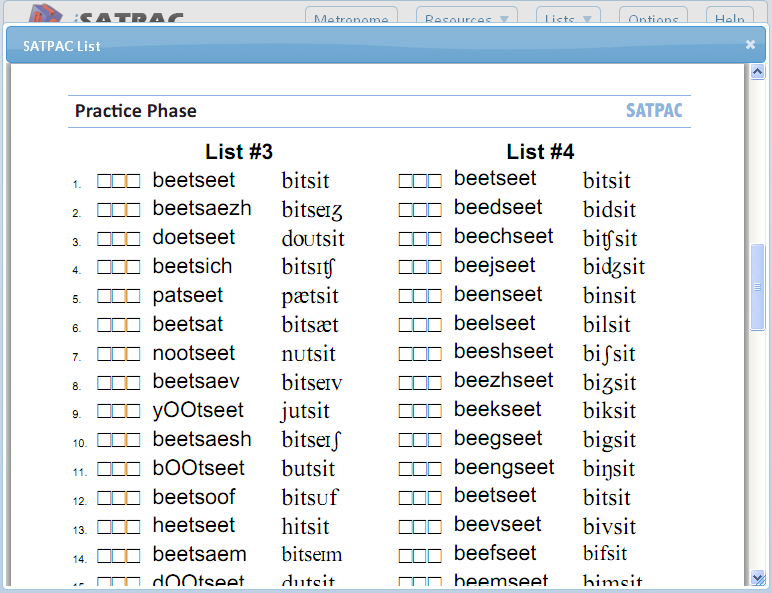 List 3 mixes patterns from the first two lists with every other word containing beets or tseet. In list 4, the student is ready to say the /s/ sound in any context and no longer needs the abutting /t/ (which was present in the first three lists) to facilitate correct /s/ production. 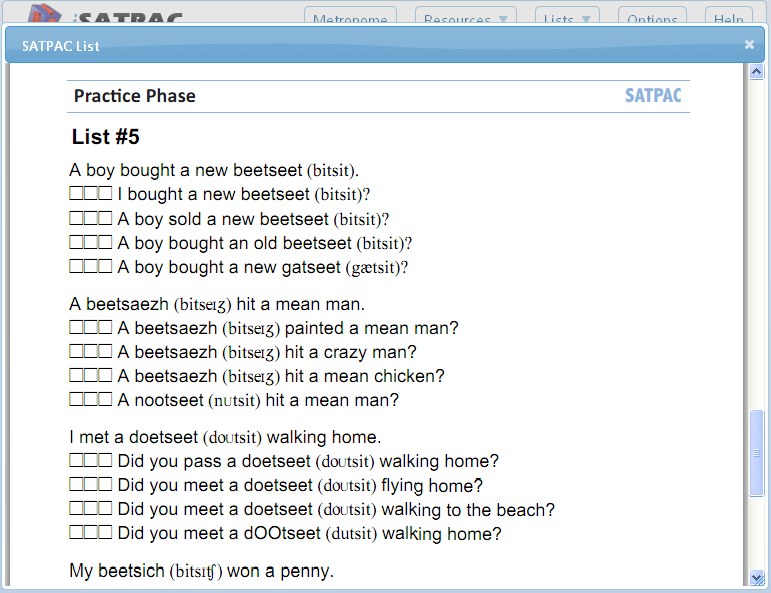 The SLP reads the questions and the student responds with the top sentence using appropriate inflection based upon the word that was changed (e.g. SLP: A boy bought an old beetseet? Student: No, a boy bought a new beetseet). Practice occurs taking stress away from the target sound which is more like normal conversation and leads to quicker generalization. The student is also generating novel sentences which again is a more complex task and again more like normal conversation.

After the Practice Phase, the target sound is transferred and generalized into real phrases, sentences and contrasting sentences: 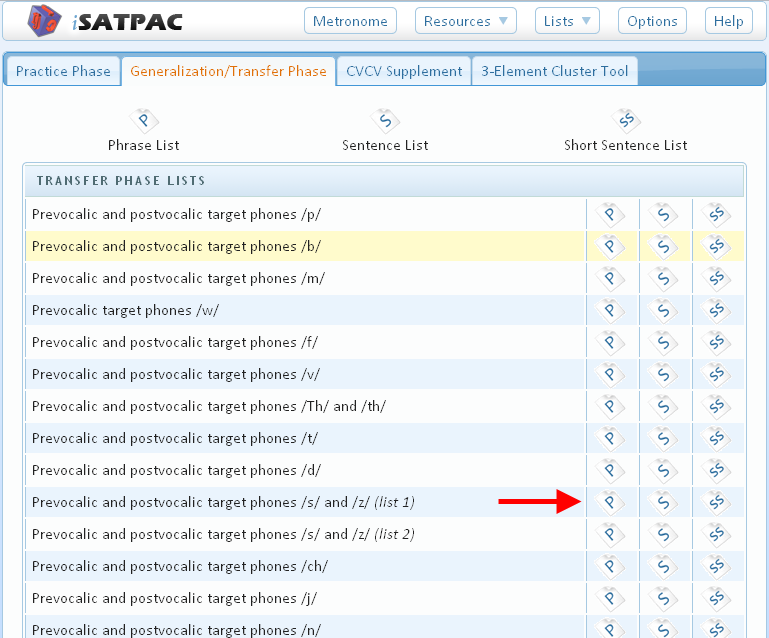 There are 50 phrases abutting every consonant sound in both the prevocalic and postvocalic position (e.g., soft whisper, knapsack mess, single houseboy etc.). There are 100 target sounds making it easy for documentation. 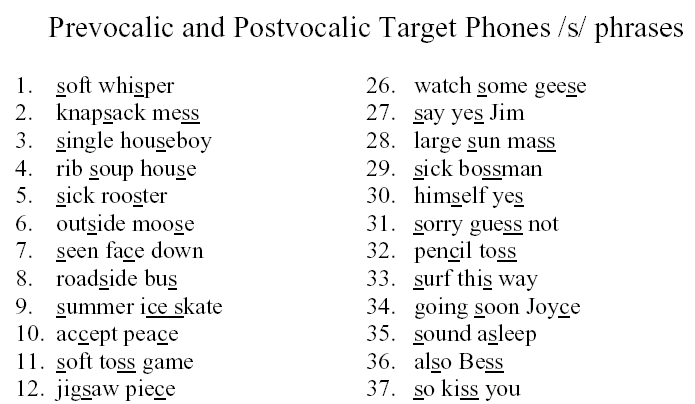 Short sentences with 50 prevocalic and postvocalic target sounds are next: 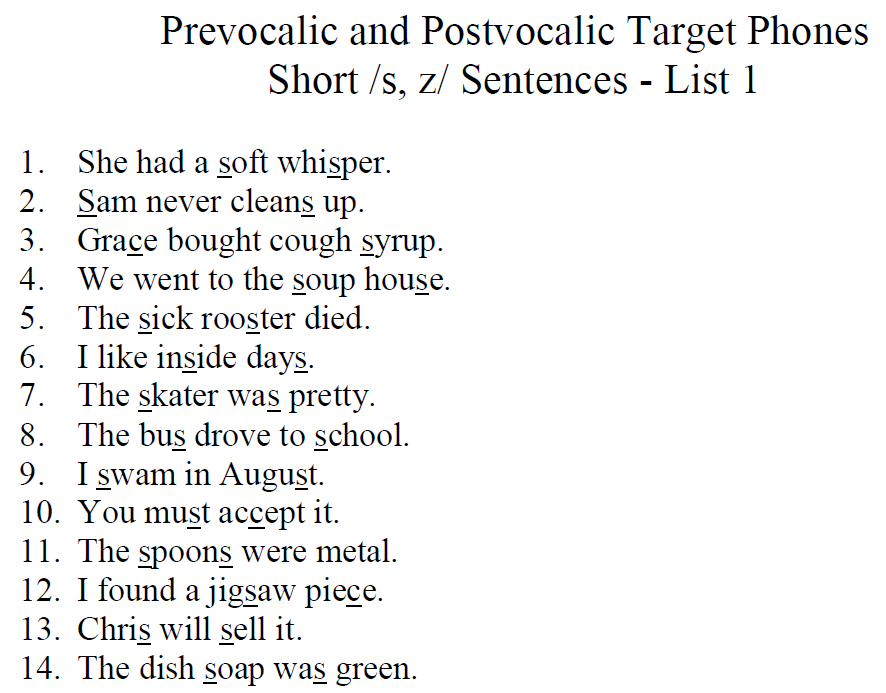 After completion of the short sentences, longer sentences loaded with the target sound are presented if appropriate. There are 100 target sounds for ease of documentation: 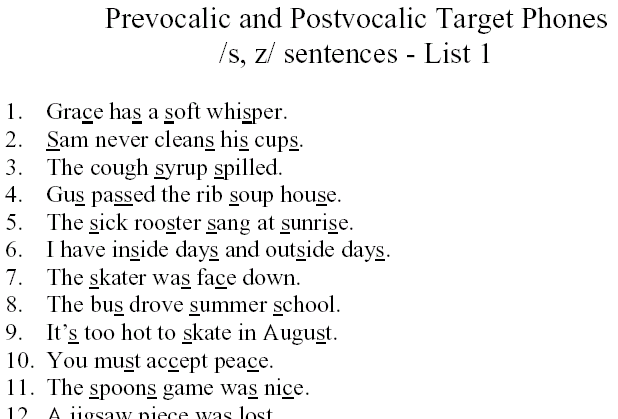 The generalization/transfer phase continues with contrasting sentences. In this case, the difficult /th/ sounds are contrasted with the /s/ sounds in both short sentences: 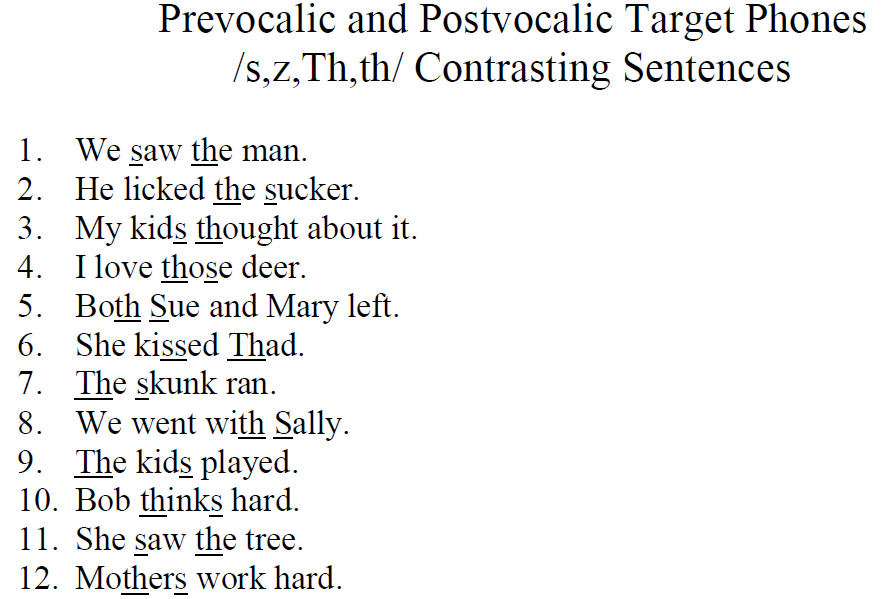 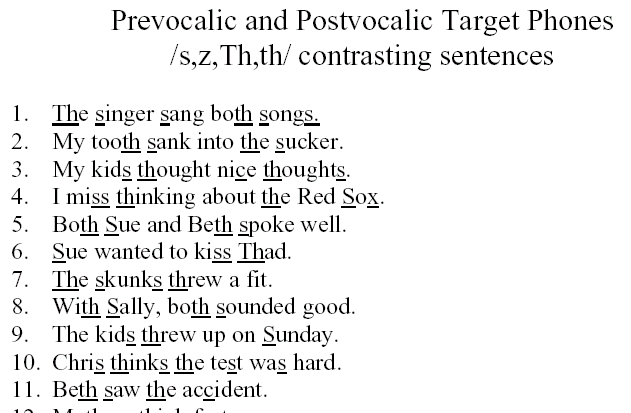 While not part of the SATPAC Program, the CVCV supplement is a helpful tool for developmental apraxia, phonological process contrasts, etc. For a 3 to 4 year old with Childhood Apraxia of Speech, this might be the profile (All consonant sounds eliminated except /p,b,m,w,t,d,n/. 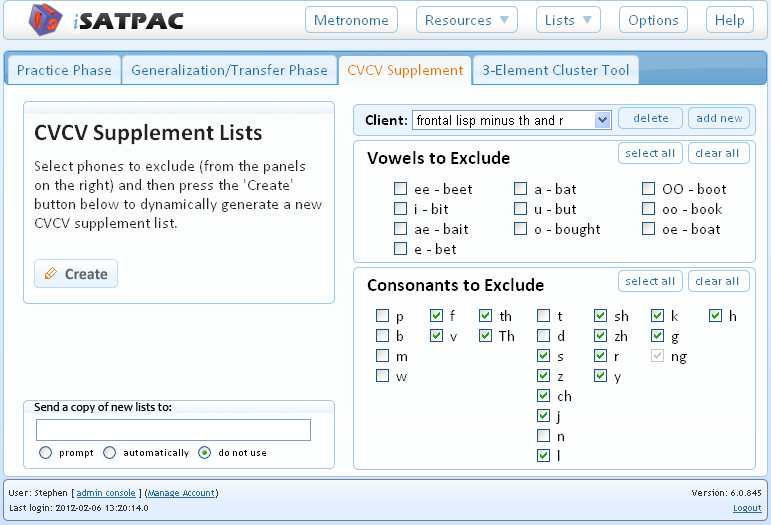 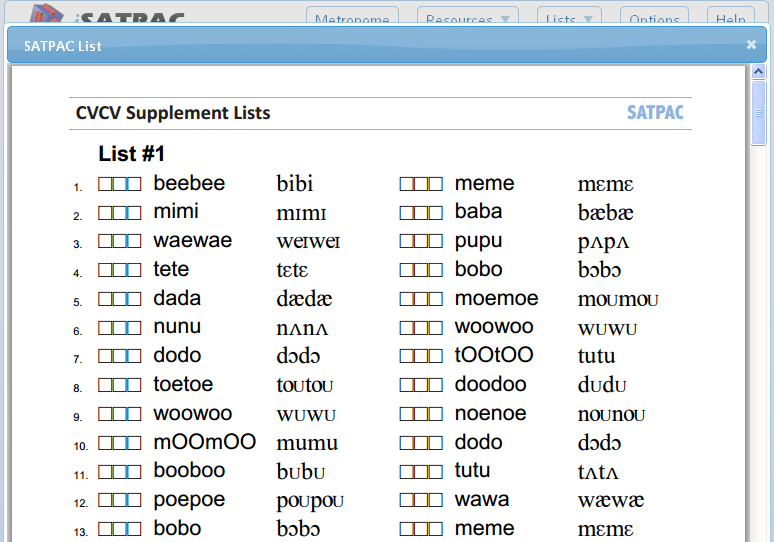 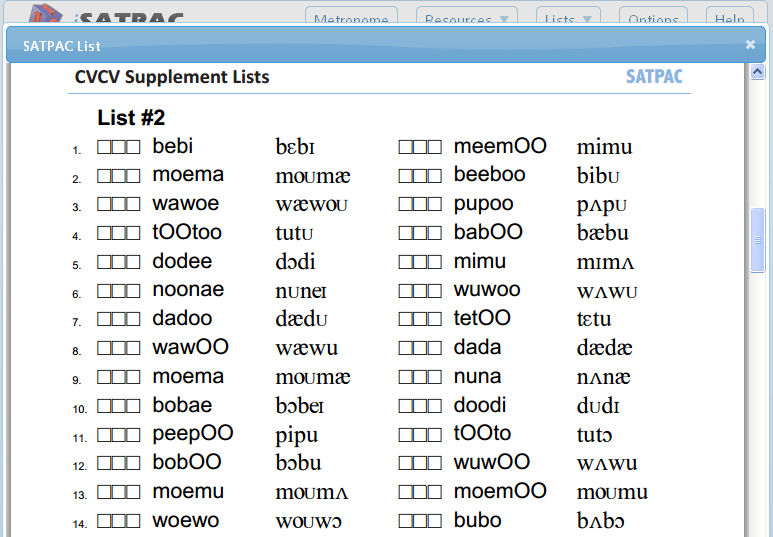 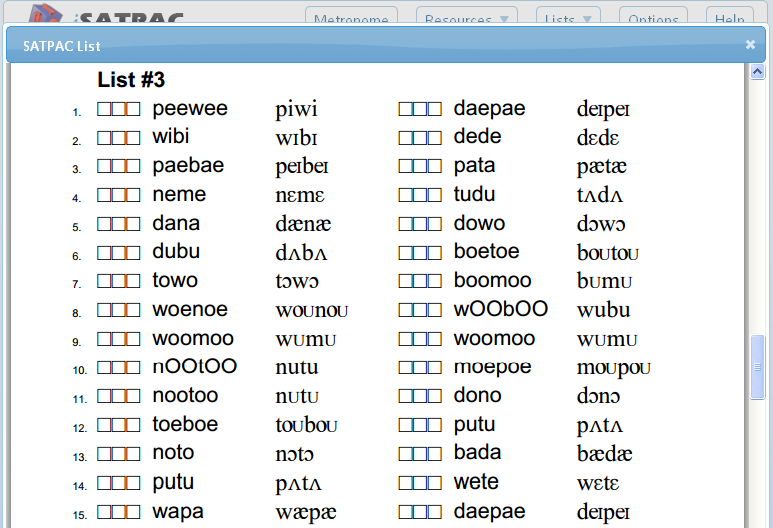 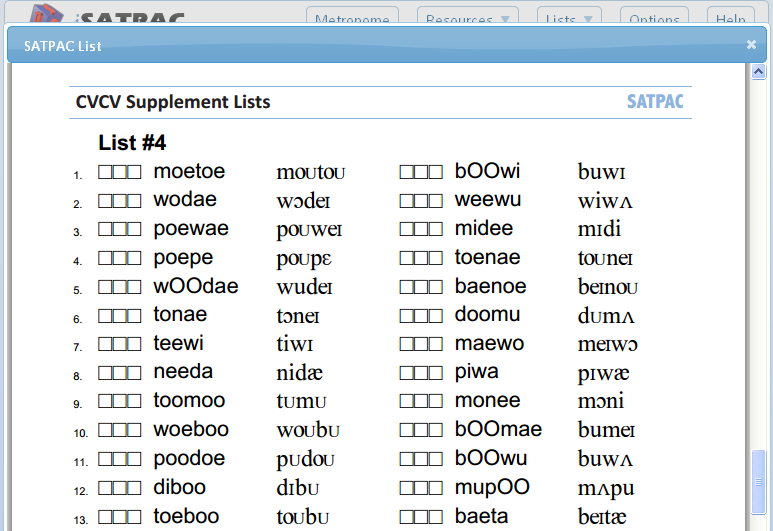 For the fronting process, all consonant sounds are eliminated except for /t,d,k,g/ In List 3, note how the student gets to practice the difficult front to back and back to front movements with the random consonants. 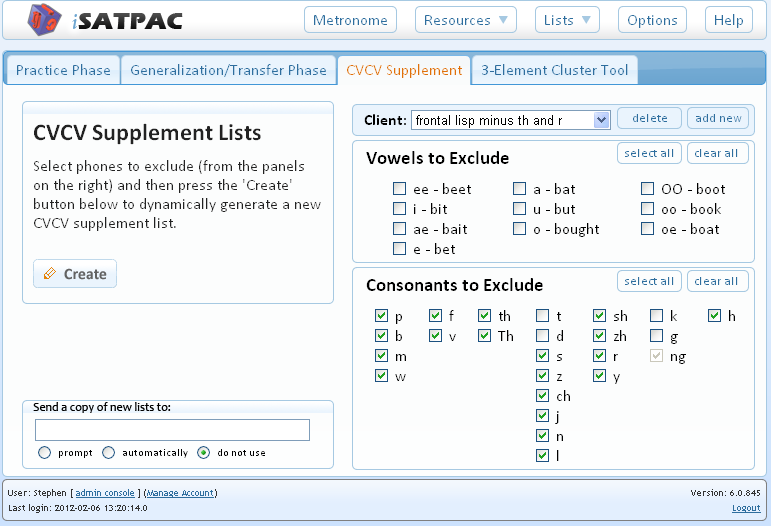 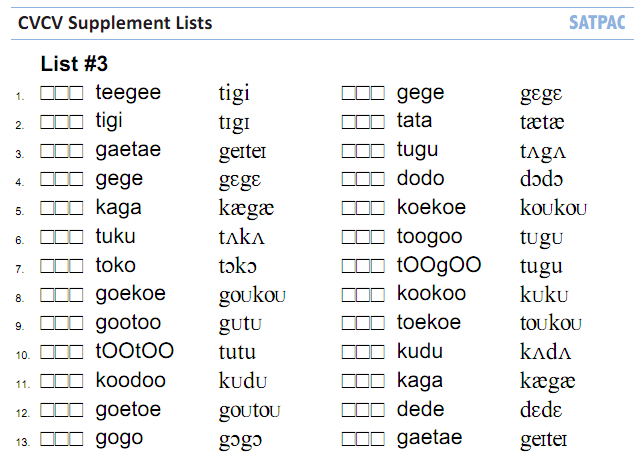 Practicing more complex targets often leads to remediation of simpler targets without having to practice them. 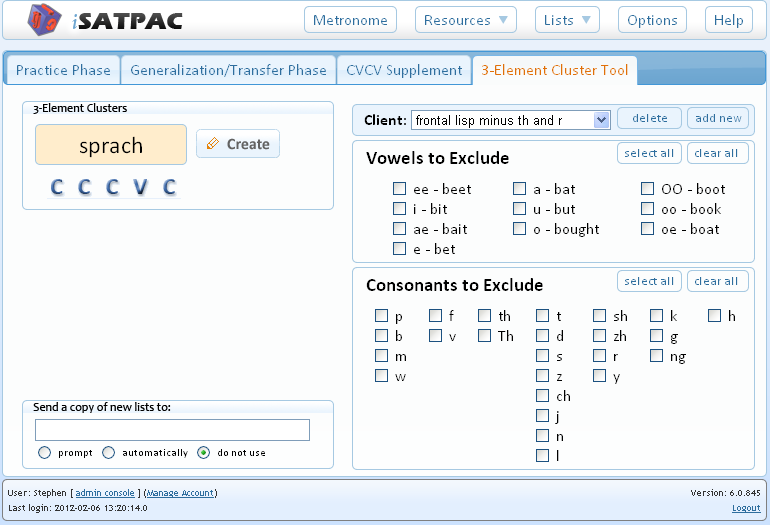 The CCCVC word sprach is entered. 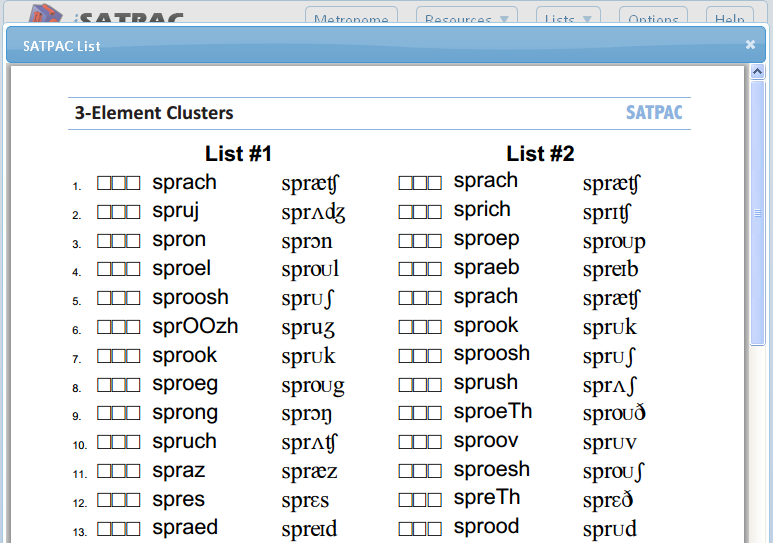 Sign-up for free trial of iSATPAC today. If you already have an account, you can login to iSATPAC by clicking on "Login" button at the top of the screen.